BY THE OUTSIDER ARTIST SAINT ERKEMBODE (aka David Kelly)

part of an exhibition starting this weekend in Paris, Amiens, Saint-Valery-sur-Somme. 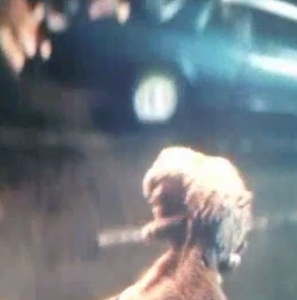 from We are Warriors (novella of flash fictions in progress):
GERALD GOES ON A BUSHWALK
Gerald wasn’t sure what to do now that the Spring Breakers were gone. A heavy slanted rain was lashing his forehead so he ducked under the cover of some bushes. He sat cross legged and began thinking about various ways to contact the spring breakers. He thought about the witch and tried to imagine the connection between a witch and spring breakers. He grabbed a big stick and began whacking the bushes. He was a bush whacker. Gerald walked for two days. Along the way, he picked up rattlesnakes and cooked them on a nice little campfire. The rattlesnake was kinda dry and a bit rubbery but Gerald was a tough cookie. He could handle a rattlesnake and eat one too.
As he was sitting around his little camp fire on day two, munching on rattlesnake, Gerald thought about a circle. He knew the ancients were all about circles. His ancients and other ancients too. So he drew a big circle with his stick and sat down inside it. He didn’t really have a spiritual animal; he had the mimi shakes. When he sat down in that circle all sorts of two dimensional mimi spirits came to him from the ghost of his great uncle, saint Erkembode. Saint Erkembode had met with his people and took some of them to Australia where they met the mimi spirits. Some of them returned with little mimi spirits in their bag. When he was seven, Gerald met his first mimi spirit. He hadn’t spoken to them since.
Today is a good day for mimi spirits thought Gerald. If anything, the mimi spirits will know what’s up with witches and spring breakers. Gerald has always loved witches. No that’s a lie. He’d never met a witch but he liked imagining them. Now he had met one he wanted to meet her again. He had a lot of questions about time and seeing the future and that sort of thing. Of course witches are not about broomsticks. Of course there are witches in history that are burned because they are a woman and men are scared of women. But Gerald wasn’t after that kind of witch. There was something about those spring breakers. They were not your average spring breakers. It was like he had awoken from a coma. No. Not a coma. He was never in a coma but he was in a bit of a lull. Now the seat belt around his neck, the gun barrel in his mouth, the group hug, and then the witch. The witch who had gone off into the forest to look for the spring breakers. Now that was a mystery.
And so Gerald sat in that circle. Thinking and then thinking again. His thoughts were a circle. Sometimes a line. And sometimes something else altogether.
WRITING PLAN NEXT PART OF NOVELLA:
continue with story. The two robots take over town of Hurricane. They make it with future Mormon missionaries down by the creek while reading Whitman. They visit the school for lost girls and help them get tattoos.  etc. etc.
Then they go to Zion National Park to see a film. They meet Gerald. Story circles around to the beginning and continues onward with witch chasing the two robot girls because they have violated their robot contracts etc. etc. The robot girls were built to service the needs of foreign American workers in Saudi Arabia. They wanted to feel like real humans so they escaped and went on sping break. Gerald follows the witch into the forest and helps the robot girls get away. The take a crazy road trip and begin robbing banks and giving the money to the poor in secret forest locations. They become the merry robot liberation team of the forests etc. etc.

Excited for this next week. Working with the sound and outsider artist Ben Morris. YEAH!!

Moving close to Dunbar Wharf tomorrow. Where my friend David found a message in a bottle. He built a ladder of sticks during lowtide and made some chalk mimi drawings: 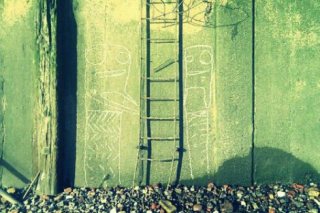 THE OUTSIDER ART OF DAVID KELLY

Thanks SJ Fowler and David Kelly: