The Manifesto Antropófago (Cannibal Manifesto in English) was published in 1928 by the Brazilian poet and polemicist Oswald de Andrade. The essay was translated to English in 1991 by Leslie Bary.
Its argument is that Brazil’s history of “cannibalizing” other cultures is its greatest strength, while playing on the modernists‘ primitivist interest in cannibalism as an alleged tribal rite. Cannibalism becomes a way for Brazil to assert itself against European post-colonial cultural domination. The Manifesto’s iconic line is “Tupi or not Tupi: that is the question.” The line is simultaneously a celebration of the Tupi, who practiced certain forms of ritual cannibalism (as detailed in the 16th century writings of André Thévet, Hans Staden, and Jean de Léry), and a metaphorical instance of cannibalism: it eats Shakespeare. 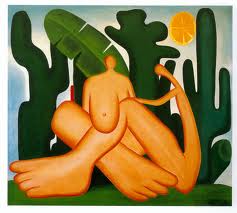